It’s an issue that still exists even today: gender inequality in the workforce. It’s unfortunate, especially considering it’s 2021. But specific to the tech industry, it’s an issue that’s still prevalent amongst women. In fact, one in three women in the tech field say they experience gender bias at their workplace.

We surveyed 1,000 women working in the tech industry to better understand their experiences working in a historically male-dominated field.

38% of the respondents said they witness gender bias at their workplace, and 38% also said that men are assumed to be more capable than women in their tech-based workplace. Not only are women experiencing or witnessing gender bias, but almost half (46%) say their organizations are not actively prioritizing gender equality within their hiring or culture. 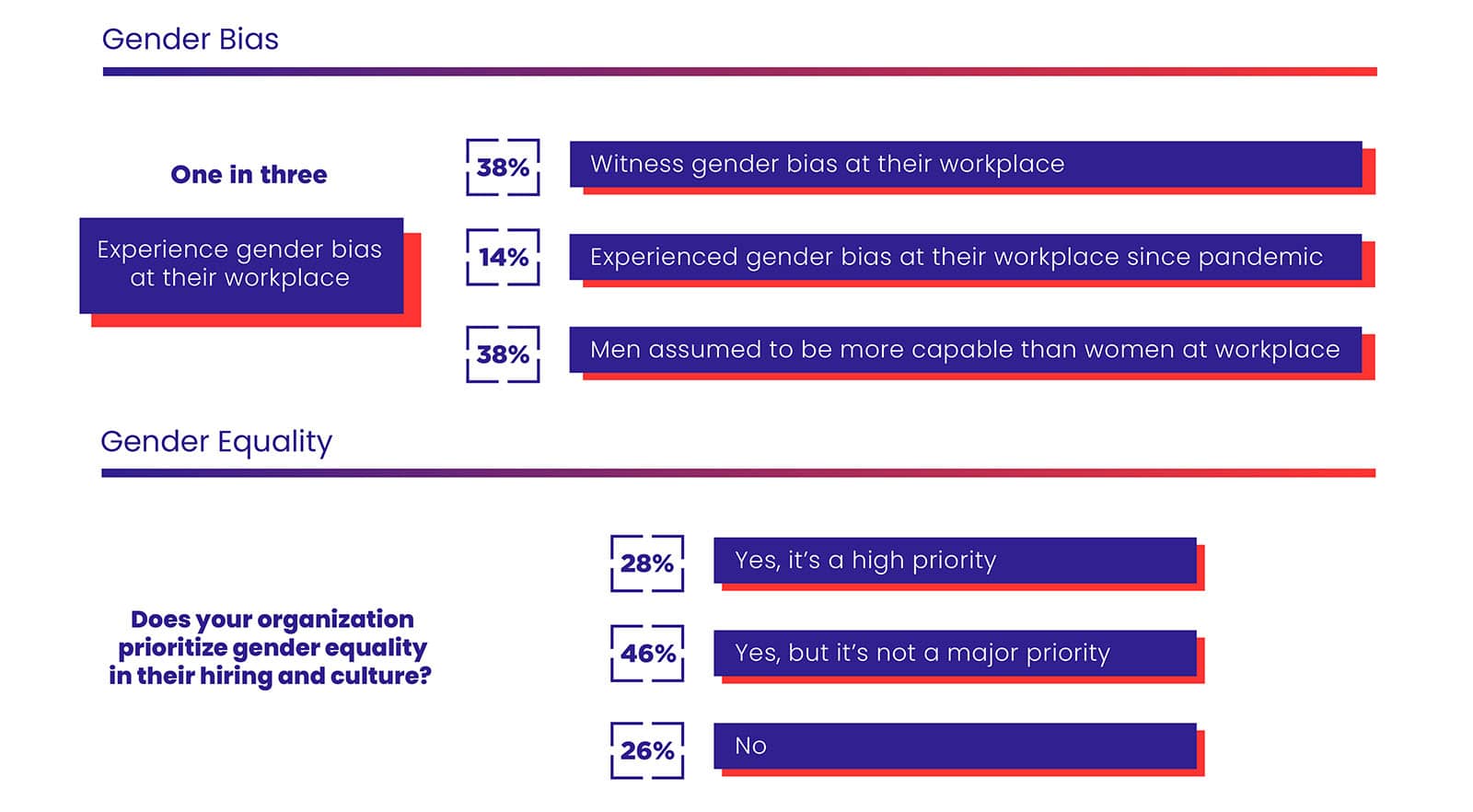 Within a workplace, a gender bias may show itself in many ways, such as a pay gap where women are paid less than a man for doing the same job. 43% of survey respondents believe there is a gender pay gap at their workplace, but only 24% of women have discussed a pay gap with their coworkers.

While some industries have transitioned to full-time remote positions because of the pandemic, many tech industry roles have always been filled by remote workers. Although some may think gender inequality only exists when people are working in an office, that bias is still being found through remote work.

One in ten women are experiencing gender-based harassment over Slack or email, and 70% said they prefer having their camera off during video calls. Almost half of the women surveyed (48) aren’t even sure if their organization has a remote work harassment policy.

The COVID-19 pandemic has changed everyone’s lives over the last year and a half, including women who work in the tech field. 52% of women said their workload has increased since the start of the pandemic, and about a quarter (27%) now find themselves less optimistic about their career.

The pandemic has also impacted women and their career plans, as 38% said they plan to leave their jobs in the tech industry within the next two years.

Why might women choose a career path in a historically male-dominated industry? Well almost half of the women we surveyed (46%) said they got into the field because of compensation, while 33% said they did it for job security. Other reasons included a passion for the industry, flexibility, and prevalence of jobs.

When you think of the tech industry, it may be harder to think of a female role model dominating the field. In fact, that’s another one of the major challenges the tech field faces, according to 48% of the women we surveyed.

There’s always room for growth or learning opportunities, and the tech field can always change. Hopefully, it does, as 81% said they believe improvements need to be made within their organization. Perhaps more classes or training for employees, or even simply hiring more women may be beneficial.

According to the women we surveyed, only 13% said their organization offers training specifically for women, versus the 54% that believe their tech company should offer specific training just for women.

While some women may be facing gender inequality issues in their workplace, there are some perks to working in the tech field. This biggest perk? According to 81% of survey respondents, it’s the flexible work hours. 74% of women say the PTO is also a perk, and 55% said it's paid maternity leave.

Other perks women are finding in the tech field include the ability to work remotely, 401k matching, training, stock options, and paid paternity leave. 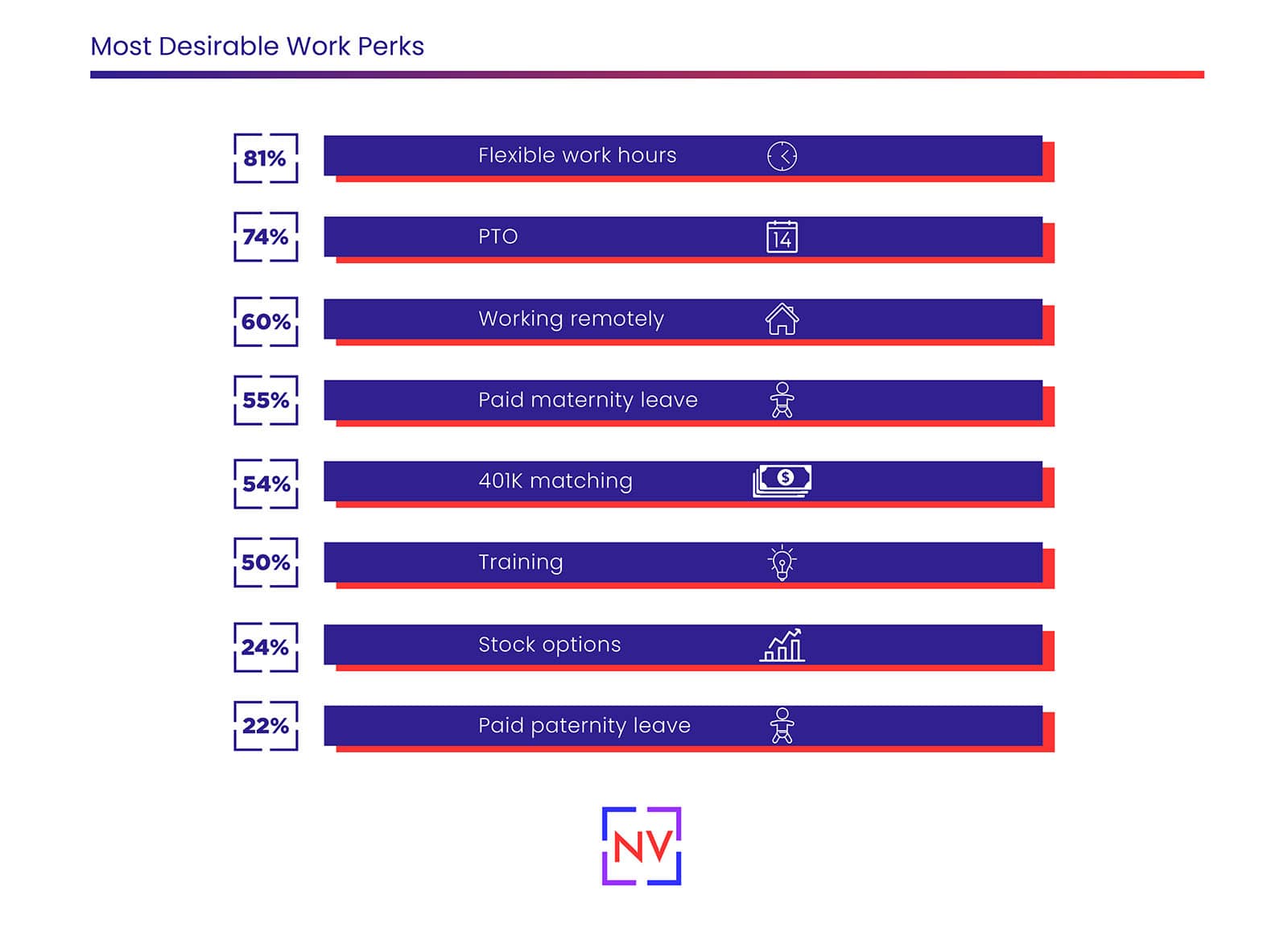 Feel free to use this data and research with proper attribution linking to this study. When you do, please give credit and link to https://getyournewview.com/

The experts at New View Strategies are experienced Dynamics NAV and Business Central trainers and business process consultants who have walked in your shoes as former Corporate Controllers, Directors of IT, and Solution Architects, and believe increased utilization of your business systems is critical to the continued success of your company.
COMPANY
SERVICESROLE-BASED CLASSESOur TeamOur CompanyMEDIA RELEASESSTRATEGIC PARTNER PROGRAMBLOGTESTIMONIALSCONTACT
SERVICES
CURRENT STATE ASSESSMENTVALUE DRIVEN TRANSFORMATIONCUSTOM TRAINING
SUBSCRIBE TO OUR NEWSLETTER
Subscribe to our newsletter and keep up to date with classes, special registration discounts, and other NVS news