People are working hard to achieve the American Dream, but at what cost? Everyone wants their business to be as efficient as possible, but studies have shown vacation days are vital to fight burnout and make sure employees are at the top of their work game.

We surveyed 500 Americans and 500 Europeans to find the differences in vacation habits, and how people have changed their paid time off plans since the pandemic started. We found Americans are working more compared to their European counterparts, and yet those in the U.S. are feeling guiltier about taking days off. But that doesn’t mean working in Europe is always a walk along the Champs-Élysées.

American vs. European Paid Time Off 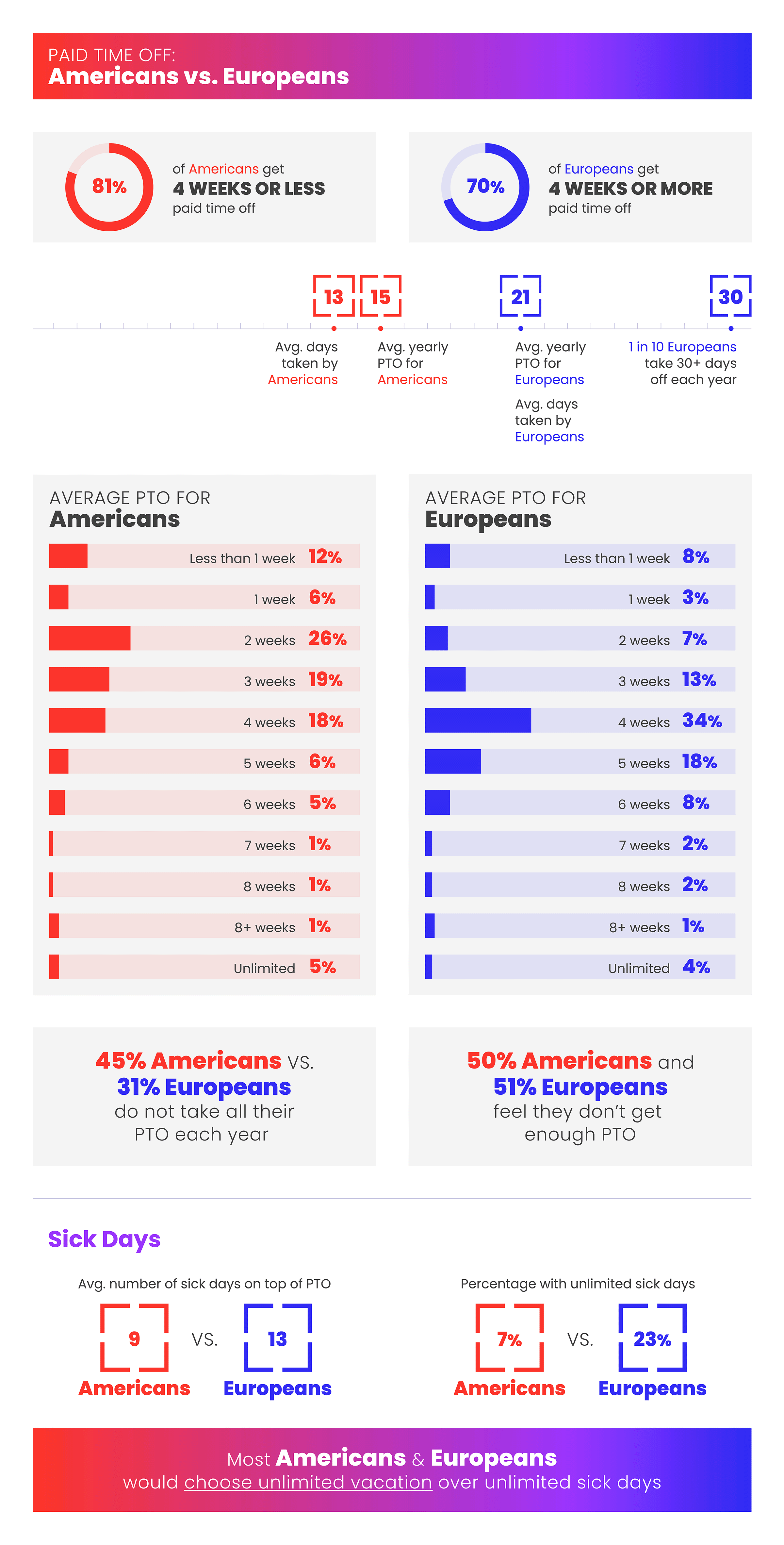 On average, Americans get about three weeks (or 15 days) to use each year. They only take about 13 days. Meanwhile, Europeans get an average 21 days off, and they take all of them. In fact, one out of ten Europeans take more than 30 days off yearly!

Almost half (44%) of Americans get two weeks of vacation or less. Despite having less vacation days as Europeans, 45% of Americans are not taking all their PTO compared to 31% of workers in Europe. 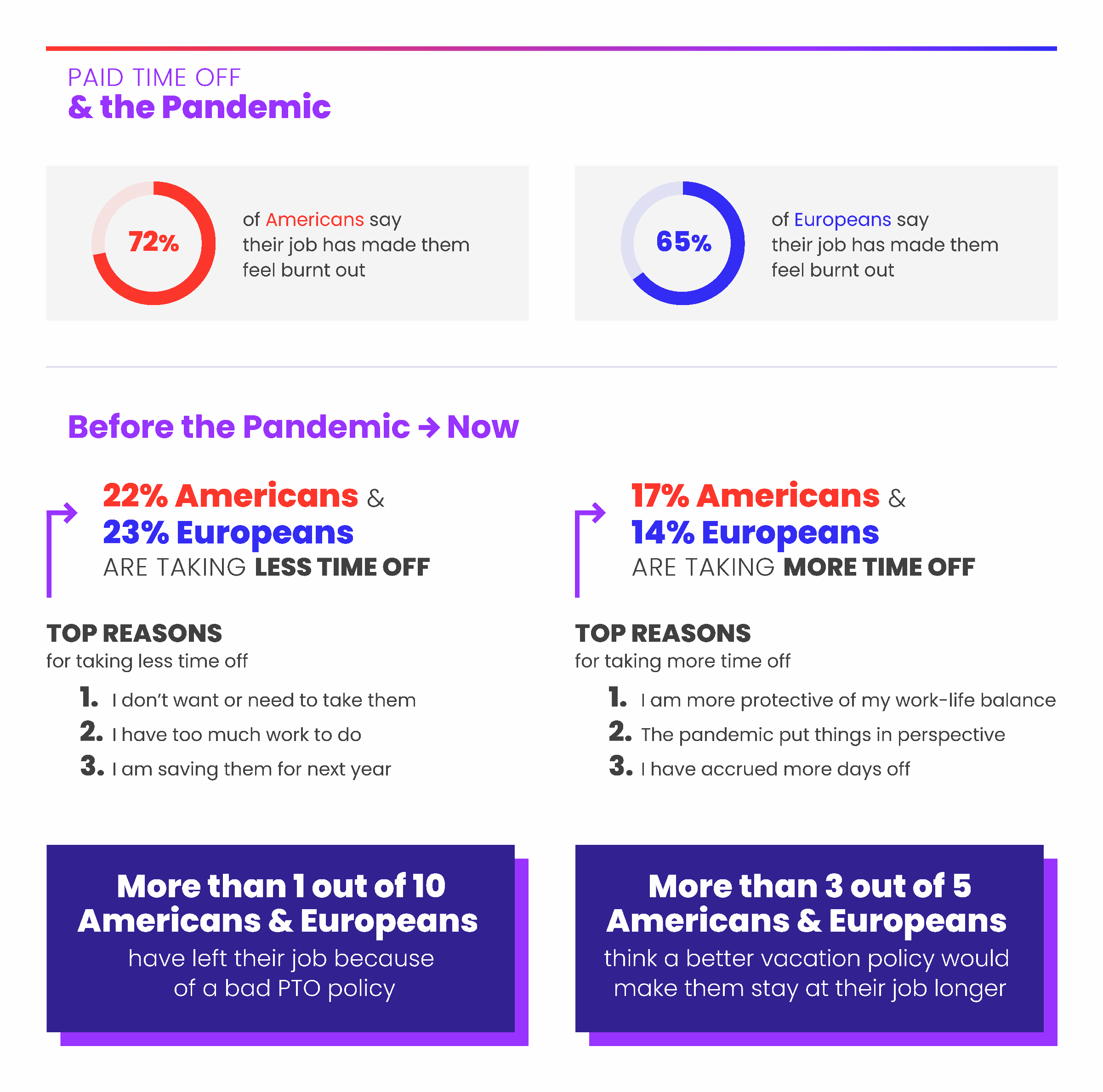 Working is taking a toll on Americans & Europeans alike. 72% of Americans and 65% of Europeans blamed work for making them feel burnt out. However, almost one in four of both Americans and Europeans are taking less time off than they did before the pandemic started. Workers said they don’t want or need to take the days, have too much work, or are saving them for next year.

Separately, 17% of Americans and 14% of Europeans have made sure to take more time off since coronavirus took over the globe. The majority said they are more protective of their work-life balance, and others said the pandemic just put things into perspective.

We know the great resignation has taken over workforces around the world, and there are a number of reasons people are putting in their two weeks, but it appears PTO policies have played a part. One out of ten Americans and Europeans have quit their job because of a bad PTO policy. Employers listen: more than three out of five Americans and Europeans think a better vacation policy would make them stay longer at their job.

Working off the Clock 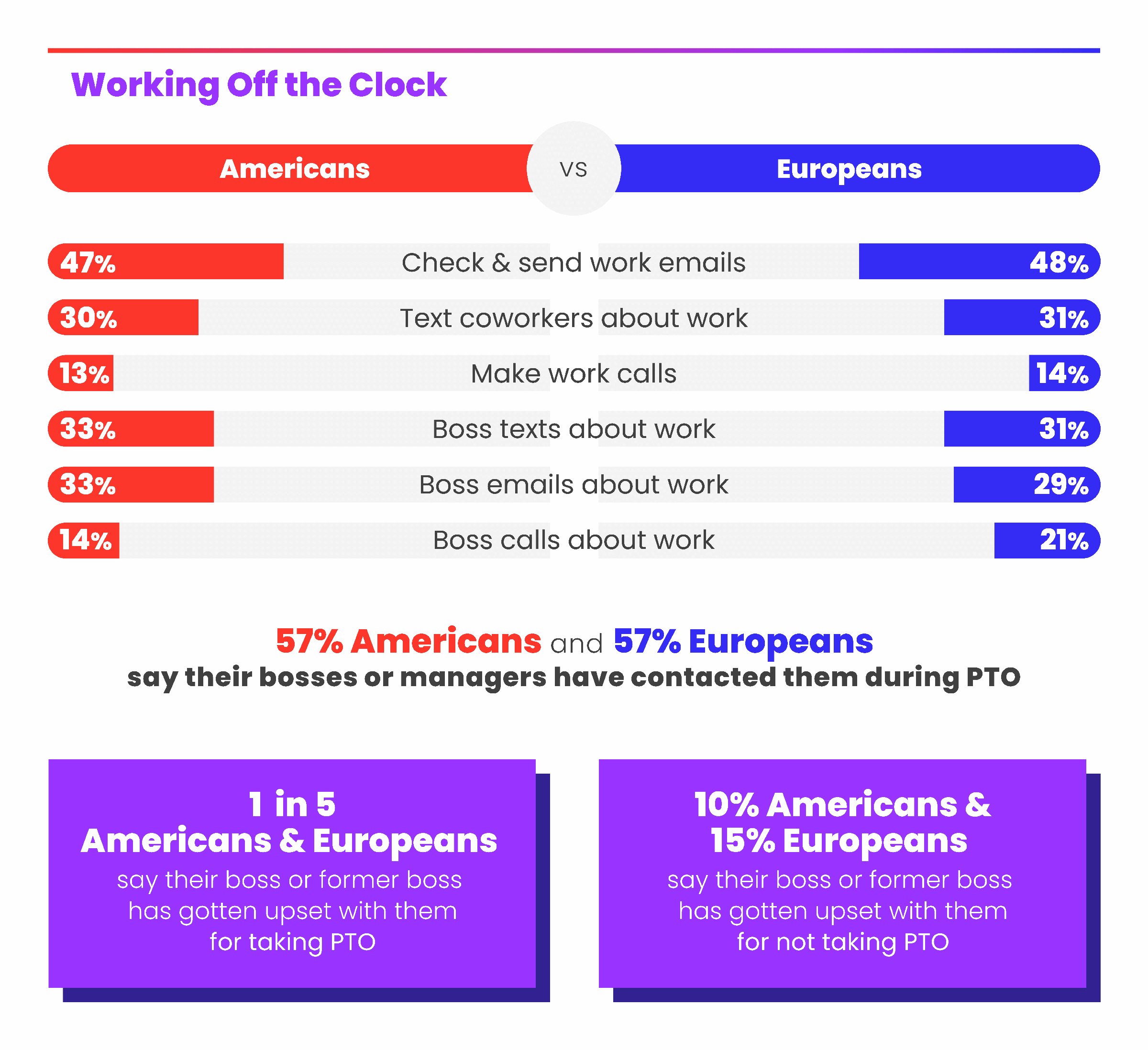 Surprisingly, both Americans and Europeans are having trouble leaving work behind when they’re off the clock. Almost half of Americans (47%) and Europeans (48%) admitted to checking and sending work emails while taking PTO. Nearly a third said they text coworkers about their job, and more than one in ten actually make work calls when they should be calling for room service.

Even worse, one out of five Americans and Europeans said their boss or former boss has gotten upset with them for taking PTO. Luckily, that’s not been the experience of all workers. More than one in ten said they’ve actually gotten in trouble by a higher up for not taking their vacation days. 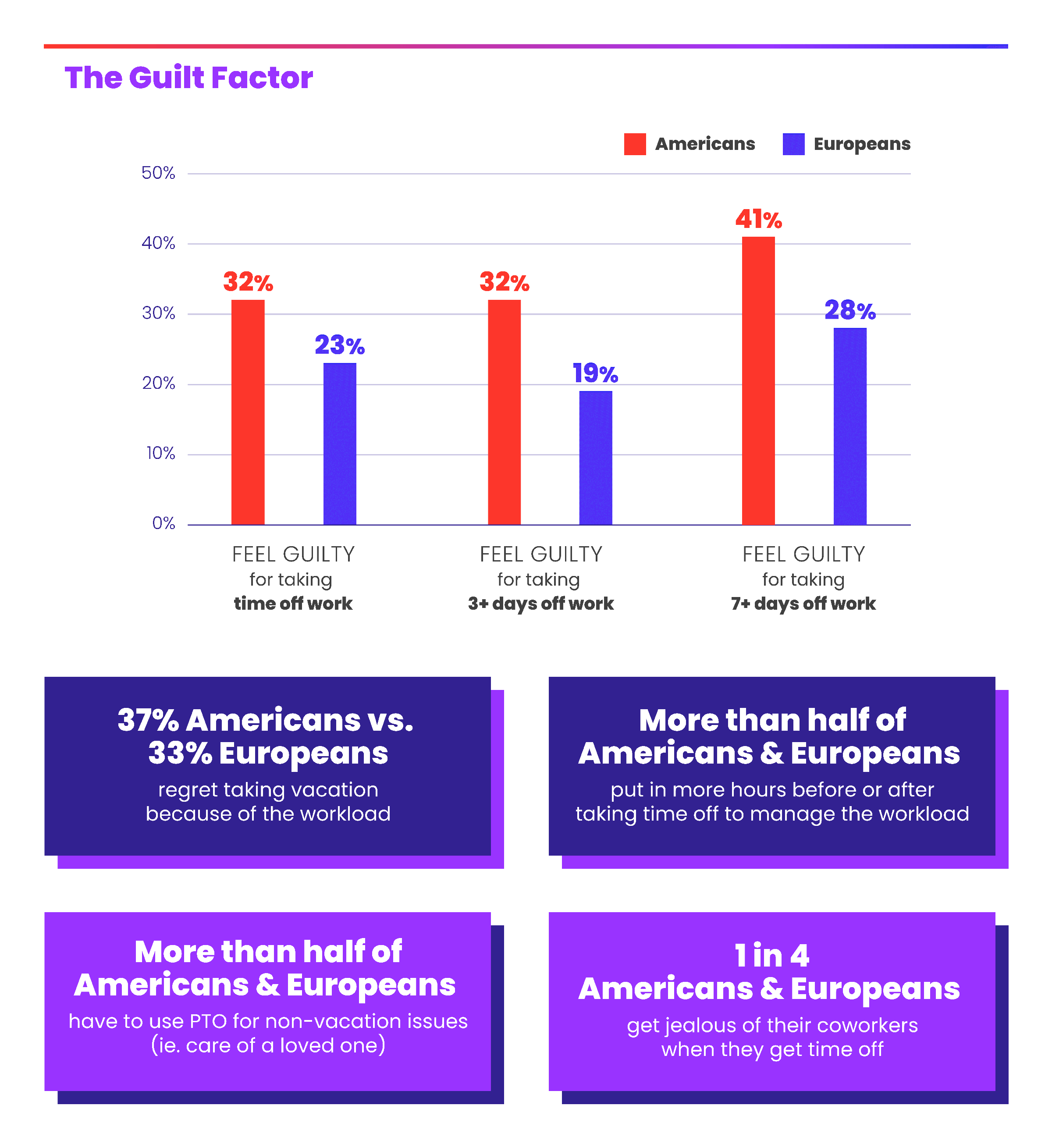 More than one third of Americans and Europeans also regret taking time away from their desks. More than half said they end up putting in extra hours at their job before or after taking time off to manage the workload.

Unfortunately, 51% of Americans and 52% of Europeans said they have used their paid time off for non-vacation issues like care of a loved one or fighting an illness instead of taking a nice beach vacation. Speaking of, one in four Americans and Europeans are secretly jealous of their coworkers when they take PTO. 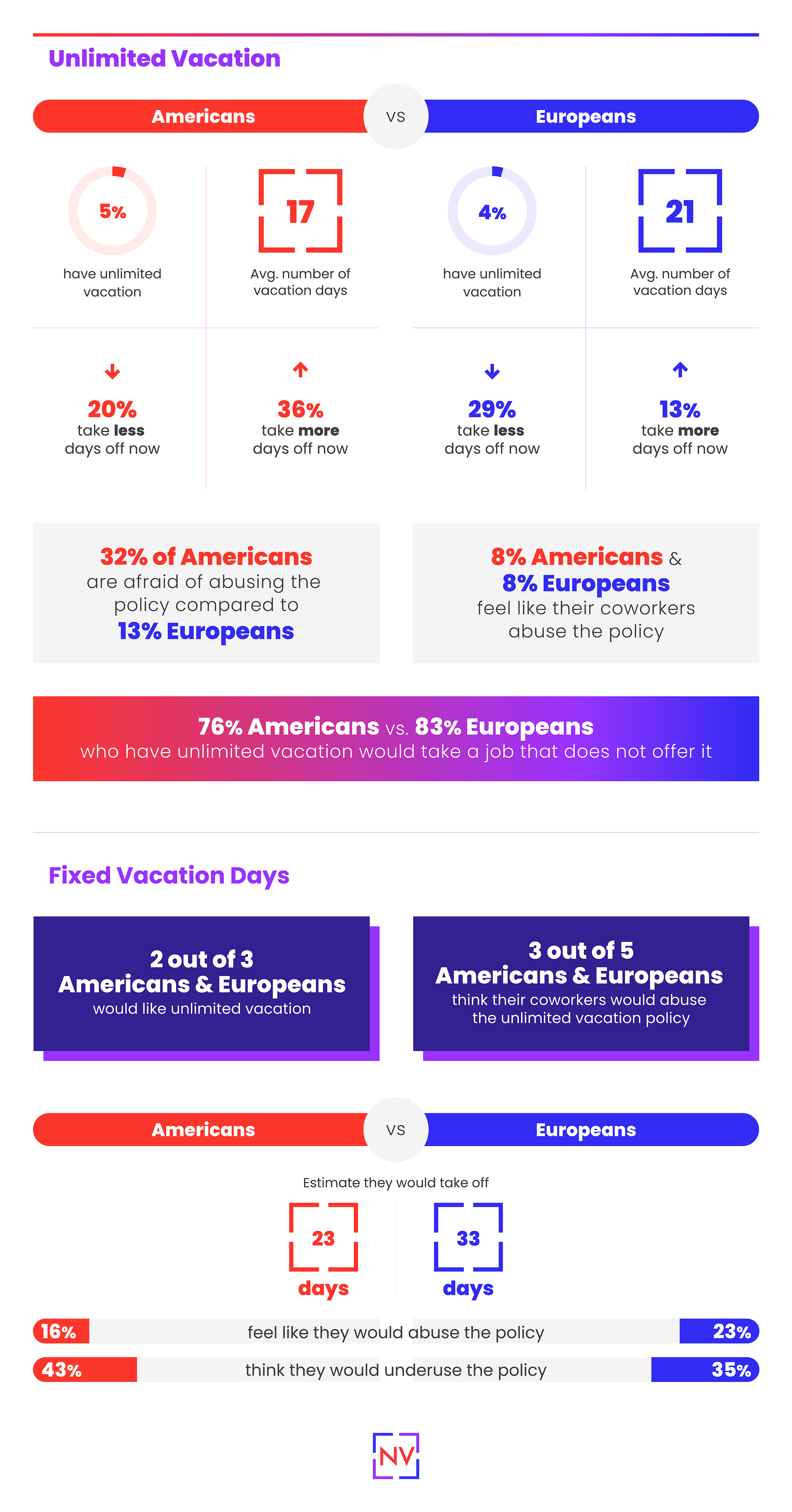 We found Europeans with unlimited vacation are taking fewer days off compared to Americans. More than one third of Americans take more days off now compared to 13% of their European counterparts. But when push comes to shove, the policy isn’t everything. More than seven out of ten workers from both continents agreed that if they took a new job, they’d be willing to take one that does not offer unlimited vacation.

As for those who have fixed vacation days, they would really like unlimited vacation. Americans estimated they’d take 23 days off if they had unlimited days, and Europeans said they would take 33 days off on average! 43% of Americans and 35% of Europeans said they would be worried about underusing their vacation days. Although less than one out of four felt they’d abuse the policy, many did not feel the same way about their coworkers. Three out of five Americans and Europeans think their coworkers would abuse it and take an excessive number of days.

When using this data and research, please attribute by linking to this study and citing New View Strategies.

The experts at New View Strategies are experienced Dynamics NAV and Business Central trainers and business process consultants who have walked in your shoes as former Corporate Controllers, Directors of IT, and Solution Architects, and believe increased utilization of your business systems is critical to the continued success of your company.
COMPANY
SERVICESROLE-BASED CLASSESOur TeamOur CompanyMEDIA RELEASESSTRATEGIC PARTNER PROGRAMBLOGTESTIMONIALSCONTACT
SERVICES
CURRENT STATE ASSESSMENTVALUE DRIVEN TRANSFORMATIONCUSTOM TRAINING
SUBSCRIBE TO OUR NEWSLETTER
Subscribe to our newsletter and keep up to date with classes, special registration discounts, and other NVS news